A History of Tazewell County

A County to Celebrate

A County to Celebrate 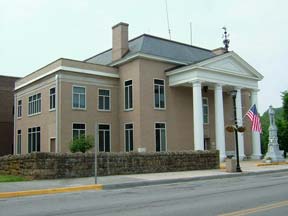 A little more than two hundred years ago, a virgin forest existed in the expanse that was to become Tazewell County. The five hundred twenty-two square miles of abounding natural resources and a large population of grazing animals made the Clinch Valley a choice hunting ground for the native Americans who were the first inhabitants. Later, hunters, from eastern Virginia traversed the area.

The first permanent settlement in the Tazewell County region came in existence around 1768. It is written that Thomas Witten was the first to locate his family in the pristine territory.

Minute industrial development took place, however, until the Clinch Valley extension of the Norfolk and Western Railroad Company constructed lines that meandered through Tazewell, Cedar Bluff, and Richlands in 1887. Access to markets on the east coast opened up new horizons.

Formed from Russell and Wythe Counties in 1799, Tazewell County received her name in honor of Senator Henry Tazewell who made the motion to create the county. Chartered on December 19, 1799, there are five incorporated towns within its boundaries—Bluefield, Richlands,Tazewell, Cedar Bluff, and Pocahontas.

Bluefield, the largest town, boasts of the slogan “Virginia’s Tallest Town.” Formerly known as Graham, it parallels a sister city in West Virginia by the same name.

From a grant by Governor Patrick Henry “in the ‘rich lands’ on both sides of the upper fork of the Clinch River,” northern investors laid out the town of Richlands in 1888. The trademark, “Center of a Friendly Circle,” characterizes the second largest town in the county.
Tazewell, chosen as the county seat, is the oldest town in the county. Once named Jeffersonville, the first settlers arrived in 1773.

Thomas M. Scott named Cedar Bluff for the cedar-covered cliffs in the immediate area. The town is proud to have been the birthplace of George C. Peery, who was elected Governor of Virginia in 1934.

Located in the northeastern corner of the county is historic Pocahontas. Jordan Nelson’s discovery of coal in this vicinity was the beginning of a mining industry that thrived for more than a century.

Agricultural sections such as Thompson Valley, Burkes Garden, and the Cove have played important roles in the county scheme. Falls Mills, North Tazewell, Amonate, Bishop, Abb’s Valley, Pounding Mill, Bandy, Jewell Ridge, Raven, and other communities have attributes that weave a successful and healthy life for those in their parameters.

The citizens of Tazewell County have much of which to be proud. In Tazewell County, there is a generous blending of the past and present and a healthy anticipation of the future.

A History of the Town of Tazewell

The town of Tazewell was first called Jeffersonville in honor of Thomas Jefferson, whose ideas seemed to symbolize the hopes and dreams of the first settlers. Tazewell, the county seat, is the oldest town in the county and combines the old and the new to create a unique charm. Many of its beautiful homes are owned by the descendants of the first builders and are noted for their historic value. Close by, modern homes, many in sub-divisions built in the past two decades, bring a new look of optimism and faith in the future development.

Tazewell was first settled in 1773, when William Peery selected a home site.  Samuel Ferguson followed and when the legislature created the county of Tazewell in 1799, Peery and Ferguson gave the land on which to erect the court house and the town.

The selection of the site for the town was not decided in a traditional manner. Two factions, the east and the west, vied for the location; the controversy was settled by a fist fight. Two able fighters were selected, and it is said: “For several hours these men fought, urged on and encouraged by their friends, until finally the ‘west’ was declared the winner and the location was set.” It is believed that Tazewell is the only town in the Commonwealth whose site was chosen this strange way.

Early Tazewell was once advertised as the “smallest town in the United States with an electric street car.” The first street cars were run between Tazewell and North Tazewell in 1892 by horse power. In 1904, the first electric car was installed, and it carried passengers between the two towns until August 1933.

Early pictures of Tazewell’s Main Street show trees planted on both sides. The trees were planted about 1878 and remained in place until 1923 when they were declared unsafe and a hindrance to traffic.

The history of Tazewell and of the buildings which tell stories within themselves is of great value to tourists who are discovering anew this part of Virginia.