First day:  Visit what is probably the most famous landmark in the county, Burke’s Garden, which is so geologically distinctive that it is visible from outer space and a topic of conversation and wonder for commercial pilots who fly over it. Discovered in 1748 by surveyor James Burke,  it is often referred to as “God’s Thumbprint,” and was the first choice for the site of what became the Biltmore Estate in NC.  Today,  the Garden contains the Lost World Ranch, which features the largest herd of Bactrian two-hump camels in North America.  The twelve miles of paved road circling the Garden  are perfect for cyclists and bikers, especially those who enjoy the designated Heart of Appalachia Bike Trail and Driving Route.  There is access to the Appalachian Trail for hikers; runners compete in a marathon on the  first Saturday of June. The  Annual Burke’s Garden Festival is held on the last Saturday in September when farmers, multiple vendors, demonstrators and entertainers set up shop.  The General Store is now managed by an Amish family and serves full meals along with hamburgers and such.

Second Day:   Visit Tazewell, the county seat and the oldest town in the county; established in 1773 , it was then known as Jeffersonville.  Now you can walk on beautiful tree-lined streets and enjoy the many historic homes and businesses, some of which were built as long ago as 1826.  The Gothic Revival Court House on Main Street is noteworthy as is the mural painted on a building enclosing the Main Street Park where a partial replica of the old high school has been built. The County Library on Main Street contains an excellent genealogy room called “The Virginia Room.”  North Tazewell is an extension of Tazewell and contains the historic railroad station which is being renovated/restored. The Clinch River flows through North Tazewell as a thoroughly beautiful river with some excellent fishing spots. You may enjoy  lunch at The Grate Escape, El Mariachi, or the Italian Village. 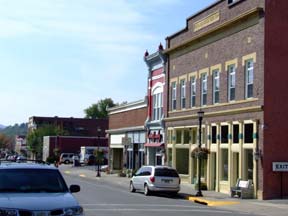 Cavitt’s Creek Park & Lake Witten are about 2.5 miles from Tazewell and can be enjoyed seasonally.  The scenery is beautiful; there are walking trails and a playground.  Eight full service hook-ups and a modern bathhouse with laundry facilities are provided near the office and 11 primitive camp sites with a bathhouse just across the way.  The stocked lake has paddle boats for rent.

The fifteen log and stone buildings help to depict a settler’s life in the early 1800s.  You can walk  between a farmhouse, a doctor’s office, corncribs, a spring house, a “Red Barn” housing antique farm equipment and more. The Museum features fantastic displays of Indian artifacts, beautiful dolls, quilts, military paraphernalia from different wars, and much more.  A replica of the 1771-73 Witten’s Fort is on the grounds and can be viewed from the outside only.  A  recent addition is a renovated, two bedroom, fully furnished cabin with a front porch and a swing which is available for rent.  Just across the four-lane from the museum is a renovated 1907 store building from another location in the county;  it now houses a restaurant, “Fisher & Co,” serving lunch daily and dinner on Friday and Saturday.  The open field joining the restaurant is the scene for the widely known Civil War reenactment held annually in April; a corn maze was added in the fall of 2014.  The locally famous “Frog Level Yacht Club,” a former service station and tavern, was moved to just across Route  61, renovated and is available for meetings, etc.

Just a few minutes west on the four-lane will bring you to “Cuz’s Uptown Barbecue,” a unique restaurant built in an old dairy barn. Open Wednesday through Saturday 2PM to 9PM, they specialize in steaks and ribs – they close December through February/March.

Second Day: (You may be able to do this day and the next on the same day.)

Route 460 leaves Route 19 at Claypool Hill and travels west toward WV and KY.  Claypool Hill and Cedar Bluff are famous locally for the “Cuts” or “Dreadful Heights” where VDOT literally cut through a mountain to construct the highway.  Turn left a few hundred feet from the red light and go up to the Park and the Overlook Trail; at the top of the trail is a fabulous view of the town of Cedar Bluff and the surrounding area; however the trail is one only the “hale and hearty” will be able to walk.  When you come down out of the park, backtrack to the traffic light and turn left to drive through the small town of Cedar Bluff, where Governor George C. Peery, 52nd governor of Virginia, was born; his home still stands.

There is little left of the old Clinch Valley Blanket Mill operated for more than 60 years, but the small park and the falls in the Clinch River at the site makes for a pleasant scene. The historic grist mill has been restored and once housed a restaurant;  great site for pictures.

Continue on Route 460W to Richlands, so named because of the fertile farming land, but meant to be the “Pittsburgh of the South” by the railroad and coal millionaires in the north. When that didn’t work out, Richlands was left with a huge railroad yard with very little traffic.  The official Coal Miners’ Memorial of the Commonwealth, with its beautiful art and realistic sculpture, is located in front of the Municipal building; the beautiful park surrounding it helps to keep the sad feelings away as you read the names of those who have lost their lives in the mining industry in Tazewell County.  Beautiful murals mostly depicting the railroad and mining industries adorn the sides of several buildings in the town.

Be sure to visit Critterville and the Clinch River Walking Trail.  If you’re interested in life in a coal camp, you may want to go up on the mountain to Jewell Ridge – voted the prettiest coal camp in Virginia in the 20s and 30s; still a pretty little town. You can find food at several area restaurants; The Lunch Box, V&V, Stir’n’dip-a-tea and lots of “fast food.”

FARMING, THEN COAL IS KING!

Begin your tour of Bluefield VA, “Virginia’s Tallest Town,” with the Sanders House, a beautifully restored 1896 Victorian mansion with eighteen rooms, several of them furnished with the original furniture.  The House was built on a 3,000 acre farm and is open seasonally for tours by appointment;  it is a “must see!”  Its outbuildings include a granary, a smoke house, a spring house and a tenant house which is the home of the Tazewell County Visitor Center. The Bailey Log House, first erected in the late 1700s, is also on the grounds and a part of the tour. Moving on downtown, stop to see the 1895 Masonic Building on the corner at the first (of two) traffic lights; it houses the Harman Masonic Lodge on the third floor, “The Last Soda Fountain”  and New Graham Pharmacy as well as “The Cornerstone Gift Shoppe” on the first floor. You can get breakfast or lunch at the restaurant, a local favorite. Neat shops line Virginia Avenue, the main street, as well as several other historic buildings.  The small park in the center of town features a gazebo where local entertainers perform on Friday evenings seasonally.  Several beautiful church buildings are worth a visit.

Route 102 out of Bluefield will lead you about 15 miles to Pocahontas; take a picnic lunch to eat in the park or plan to have an early dinner later.  On your way into town, you must pass the the Historic Pocahontas Cemetery, where many of the miners killed in the 1894 explosion in the mine are buried in a common grave.  You’ll find “The Cricket,” the last standing saloon in Virginia;  some very beautiful architecture on the Opera House, the Jewish Synagogue, and the Emma Yates Library which is housed in an historic millinery shop.

Turn on 644 to go to the Exhibition Mine and Museum,  open May to October for tours.  Excellent guides with great stories will lead you through the mine which exhibits a 12′ seam of coal and antique mine equipment. The Museum holds the original bathhouse and examples of miner’s clothing and boots in the baskets used to store them. It also contains the power plant for the mine and the dwellings in the town, making Pocahontas the first town in Virginia to provide electricity, running water and telephones to every home.

The Clinch River is the most biologically diverse river in North America.  There are populations of shellfish and plants that exist naturally nowhere else in the world.  The headwaters begin in Tazewell and the river meanders through three of the five towns within the county; Tazewell, Cedar Bluff and Richlands, eventually joining with the Tennessee River in East Tennessee.

Drive approximately four miles southwest on Route 19/460W to the Historic Crab Orchard Museum and Pioneer Village which depicts a settler’s life in the early 1800s.  The Clinch flows just across the highway from the Museum behind the Pisgah United Methodist Church, another historic landmark.

Continue on 19/460W about ten miles to Claypool Hill where Route 460W leaves Route 19. In less than a mile you’ll come to “The Cuts” or “Dreadful Heights,” where VDOT literally cut through a mountain for the highway. Turn left to go up to the Park and the Overlook Trail, a worthwhile adventure for the “hale and hearty,” with a wonderful view at the top.

Turn right on Route 460E when you exit the Park; continue to the traffic signal and turn left to drive through the small town of Cedar Bluff to Route 460W. An historic grist mill has been restored on the River here. Very little remains of the historic Clinch Valley Blanket Mill, in operation for more than 60 years, but the small park and the falls in the Clinch River on the former location are pleasant scenic areas.  Mussels of rare and endangered species can be found in the Clinch in the Cedar Bluff area.

Back on 460W travel to Richlands, a town planned to be the “Pittsburgh of the South” by early coal and railroad magnates. Here on the Clinch, you’ll discover the Clinch River Walking Trail and Critterville.  You should also be sure to see the Official Coal Miners’ Memorial of the Commonwealth with its beautiful art and sculpture as well as several large murals on buildings depicting the coal and railroad industries.

The Back of the Dragon Tour is thirty-two miles of excitement with over 260 curves and elevations of up to 3,500 feet from the valley floor to the top of the mountains.  Just west  of Tazewell, take Route 16 going toward Marion from 460W Business.  This unforgettable driving excursion is known for the incredible panoramic views and fresh mountain air.  It is a challenge for skilled motorcyclists, sports car enthusiasts as well as leaf peepers.  Eat in Tazewell before you embark on your journey or wait until you return!  There are no fast food restaurants on these mountains!

If you haven’t had enough excitement from riding 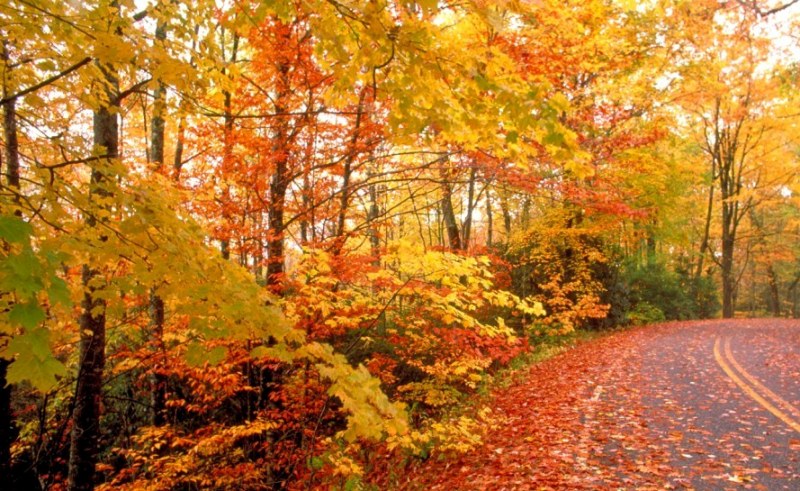 across three awesome mountain ranges, try this one! Leave Tazewell and go north on Route 16 across Stony Ridge to Bishop.  Turn east through Abb’s Valley to Pocahontas. Stop at the park for a picnic lunch and then stop at the Pocahontas Exhibition Coal Mine (open seasonally) for a tour of a former working mine and museum.

“Back on the Road Again,” take Route 102 to Bluefield VA and Route 460E; travel approximately a mile and turn right on Route 598/52 across East River Mountain to Rocky Gap VA.  Exit to Route 61W which will take you through the Clear Fork/Gratton communities, past Sandy Head Ostrich Farm and the access road to Burke’s Garden, a real thrill for all enthusiasts with wheels – then you’re back in Tazewell!

The Visitors’ Center is housed in a historic cottage behind the Sanders House in Bluefield, where our friendly staff is ready to assist you with all of your travel needs.