A History of Jewell Ridge 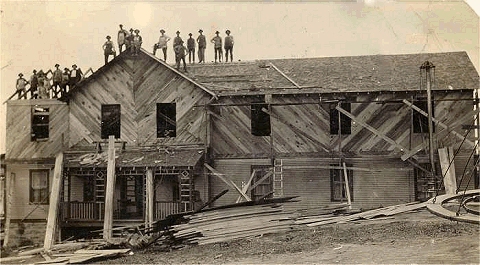 When George St. Clair, a Wytheville lawyer who had moved to Tazewell to practice law, and Thomas Righter, a Pennsylvania anthracite operator, decided to build a camp for their employees, the community of Jewell Ridge resulted.  Located about seven miles from Richlands, a unique site on the highest ridge of their 18,000 acre tract provided an area far removed from the coal dust of the operations below.

A hoist to haul materials up the steep mountainside in 1915 made possible the construction of 105 neat white houses, a row on either side of the road running alone the spine of the ridge.  Eventually a school, churches, post office, clubhouse with gymnasium, and a large company store in a central plaza joined the houses.  A theater and radio station provided entertainment.

Jewell Ridge Coal Corporation, formed in 1912 by St. Clair and Righter, began an operation on the southern edge of their property.  A railroad line soon extended to the mine.  As early as 1927, the company owned an electric power plant and a modern water filtration plant to ensure adequate utilities and pure drinking water.

In the late 1920’s the Jewell Ridge Coal Corporation employed 650 men and shipped 2,000 tons of coal daily.  After World War II, when the company began to scale back, the company houses were sold to residents of the community.  Today many of the residents are descendants of the original employees who realized they lived in a very special area.