A History of Pocahontas Cemetery

When a visitor approaches the quaint Town of Pocahontas, Virginia, he or she sees a large cemetery which bears witness to the history of Pocahontas.  Just as Pocahontas was once a prosperous boom town, this unique cemetery was once much like a picturesque park.  The stalwart residents had taken what was a grave tragedy and transformed it into a blessing for the community and surrounding area. 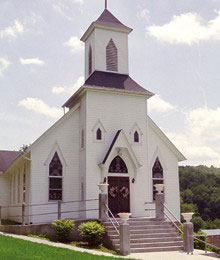 The Pocahontas Cemetery evolved in March, 1884 as a result of the history-making mine explosion that tore through the East Mine of the Southwest Improvement Company, claiming the lives of some 114 men and boys.  The March, 1884 edition of The Virginias  of Staunton, Virginia, edited by Jed Hotchkiss, reported that sixty-five of those killed were Whites (twenty-six of whom were Hungarians with the others being a few French, Germans, Italians) and the Blacks who were primarily from Virginia.

Throughout its history, victims of smaller mining explosions and accidents have been laid to rest here along with others from Tazewell County, Mercer County, and McDowell County.  Stone markers hewn in the native tongues of Hungarian, Italian, Russian, Polish, and Hebrew line the countless graves.  These markers only further epitomize the uniqueness of the Pocahontas Cemetery, for it was most unusual for people of different races and ethnic backgrounds to be buried together, especially in the South during the era that gave birth to the cemetery.  These peopled lived closely together, worked together, died together; it was fitting that they be buried together.

One resident relates, “I can remember as a child that hardly a Sunday passed that many of the town people met at the cemetery to discuss the happenings of the week past.  There was a storm shelter on top of the hill with a cement walk leading to the building.  Along the pathways there were iron benches for resting while you talked with other visitors in the cemetery.  I also remember the neatly kept fish ponds with beautiful gold fish.”  The cemetery was a good place to take pictures of courting couples.  One man related that his father had proposed marriage to his mother in the cemetery, and he could remember how his parents described this beautiful park-like final resting place.

Today the Pocahontas Cemetery is being restored under the cooperative direction of Historic Pocahontas, Inc.; The Virginia Department of Historic Resources; and the Town of Pocahontas.  Much work has been completed so that generations to come can enjoy this historic cemetery.