A History of Richlands

Formed from the ‘rich lands’ on both sides of the Upper Fork of the Clinch River, the name Richlands evolved from the land grant of 1785 by Patrick Henry, Governor of Virginia.  The natural resources and coal reserves prompted attention to the valley, and arrival of Norfolk and Western Railroad provided enterprising capitalists the incentive for purchasing vast holdings. 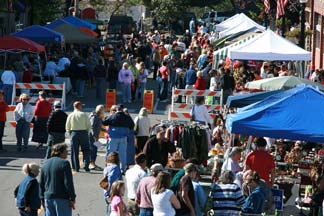 Seven independent firms made up Clinch Valley Coal and Iron Company which procured nine-tenths of the Richlands Valley.  These holdings included 700 acres adjoining the town and some 30,000 acres of adjacent coal and iron land.  The ambitious land barons envisioned a “Pittsburgh of the South,” and they set out to sell Richlands to the world.  Along with local investors, speculators as far away as Pennsylvania, New York, and Alabama took advantage of the investment opportunities.

After the company platted the town in 1888, named streets, and designated strategic locations for the industrial sites, the town began to take shape.  “Overnight” the old Gillespie farm that had dominated the prime area became a manufacturing center which was rival to Birmingham in its population and activity.  Along with opening of a modern bank and a new company office building in 1880 was Hotel Richlands which equaled the Waldorf Astoria of that day.  The rolling mill (iron and steel plant) began operation and other manufacturing firms either opened for business or were under rapid construction.  Availability of one hundred homes in just a period of six months allowed citizens a choice of living quarters.

In addition to structural growth, progress continued in the building of roads and bridges and implementing of a water system, as well as other services to accommodate the town’s new residents.  To aid in the development, European immigrants arrived to work in the factories and to mine the coal fields.

With the incorporation of the town on January 26, 1892, came a mayor/council type government in which the town manager carried out administrative duties and the council, comprised of six elected members, performed executive responsibilities.  A mayor, also elected, provided leadership in the policy process and served as ceremonial head of local government.

Unfortunately, the imaginative group who came “to boom” Richlands suffered a great loss when the stock market crashed in 1893 and depression ruined the country; with the crash, the infant town collapsed.  The officials of the Philadelphia-based company telegraphed their agents to return home, the rolling mill shut down, the doors of the Hotel Richlands closed, and only valueless property and determined people remained.

In spite of the difficulties that accompanied the industrial depression, the true spirit of the pioneer remained intact.  Those who stayed in the area farmed and did rail splitting or woodcutting—anything to get through the perilous era.  Hotel Richlands became Old Dominion College for a few years, the defunct brick factory reopened under new leadership of local survivors, the bank reorganized, business resumed, and the town came to life again. Gradual progress resulted despite the nurturing influence of an organized company, and Richlands became “the center of a friendly circle.”